"What Is The Doppler Effect Sound?"

The Doppler Effect Sound is an interesting effect that happens when an object that produces sound starts to move. This movement...

This creates a change in pitch. Any time you hear a rise or fall in pitch from a sound producing object that is moving, you are hearing the Doppler Sound Effect. 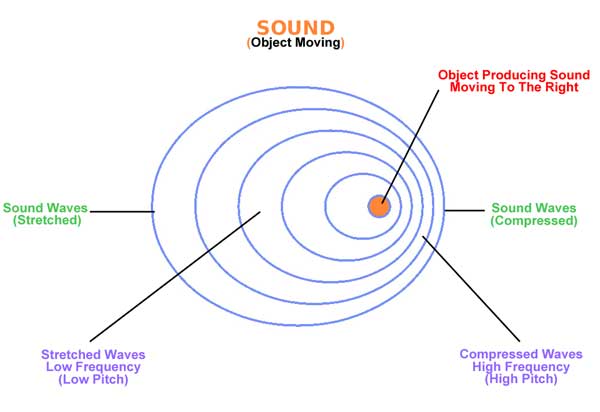 The Doppler Effect Sound can be heard when a sound producing object...

Also, if the air that the sound travels through is moving (ex. gale force winds), it also will have an influence on the sound. It is a mixture of these three factors that determine what type of Doppler Sound we hear.

As this sound producing object is not moving, We would need to move at speed to hear the Doppler effect (ex... in a car).

Two common, but good examples of the Doppler sound that most people have heard are...

The Doppler Sfx can be slow or fast. The fast effect can stand out more as the fast slide from high to low pitch instantly registers in our brain. Fast objects going past you create this fast slide in pitch, (ex. racing cars).

F1 Grand Prix at Silverstone 2006 (on the start finish straight)

As you heard in that video, The Doppler Effect sound, rising in pitch as the cars come in from the right, then falling in pitch as they move away to the left. The slide from high to low pitch occurs at the moment the cars pass by in front of you.

The high speed start finish straight (200mph approx.) was a good place to listen to the effect. This is because the higher the speed, the greater the difference in pitch between the compressed waves (high pitch), and the stretched waves (low pitch). Therefore when the slide occurs between the High and Low the effect is more noticeable.

Sound of an aeroplane travelling away (overhead).

It is faster. You would expect to hear a very quick Doppler effect. However, the effect sounds slow because the plane has to travel from one horizon to the opposite one. Because this is such a huge distance the effect takes longer, (we will only hear the sound when it comes into range between these two extreme distances, as sound fades over distance and gets absorbed in the atmosphere).

Compare this to the F1 car which can cover the length of a football pitch (100 metres) in 0.5 seconds at about 200mph. We hear a fast effect as the F1 car has less ground to cover than the aeroplane.

The aeroplane`s sound is also perceived differently as it is above us instead of in front, and it is also further away than (ex...motorbike or ambulance).

Uses for the Doppler effect

The Doppler Effect applies to all types of waves (sound,light,electromagnetic etc.). Some of their uses…

A small bit of history

The Doppler Effect, also known as Doppler Shift was named after Christian Doppler from Austria. He studied physics and first suggested the possibilities of the effect relating to all types of waves (ex. light etc.) in 1842. After experimenting with sound, the effect was confirmed in 1845 by Buys Ballot.